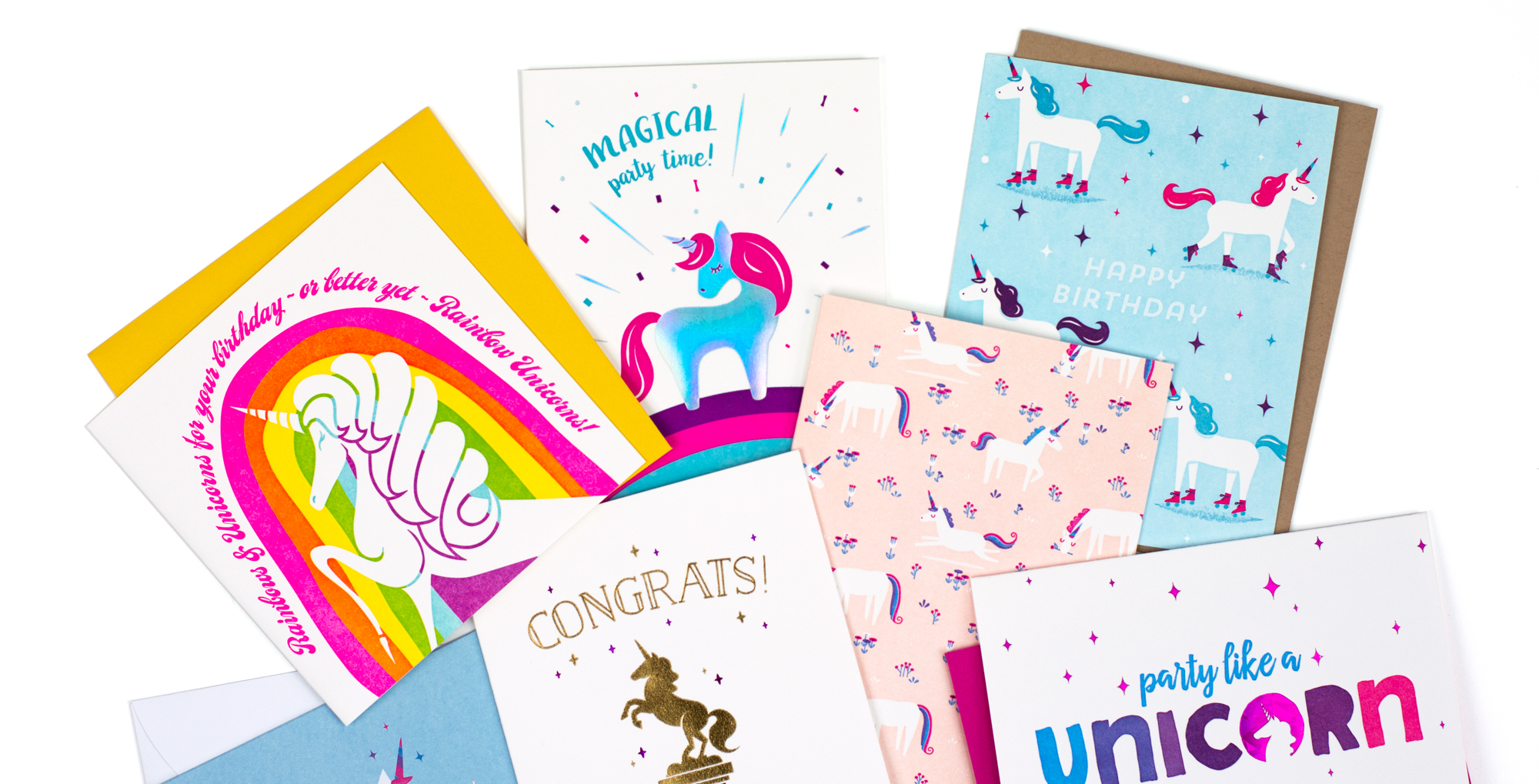 Hello! We are Elūm and we have a problem. We’re obsessed with unicorns. We can’t stop thinking about them and adorning our paper goods with them. “They’re fun,” declares Haley, one of our senior designer. “They’re a symbol of joy, hope and boundless magic. It’s no wonder they have spread into things that are usually mundane. Why not add a dash of magic to dyeing your hair, bringing a reusable bag to the grocery store, or even your morning toast?” Today we’re celebrating our U-love by hosting an Elūm roundtable devoted to our favorite mystical beast.

Shannon, another one of our senior designers, asks the question, “Why be a pony when you can be a unicorn? Unicorns remind us to be our own unique selves, and that which makes us different makes us powerful.” At Elūm we believe there is nothing in the world quite like unicorns and nothing quite like you. That’s why we come to work each morning. Rhinos and narwhals are the only other mammals on the planet who have a central single horn like unicorns (the narwhal’s amazing spiral horn is actually a protruding canine tooth), and we celebrate their adorable uniqueness too.

Our designer Olga believes, “Unicorns are both symbols of childish innocence devoid of any additional subtext, as well as an ironical and witty

representation of all things weird and impossible in our daily lives.” The collective noun for unicorns is a blessing of unicorns, and that’s what we believe unicorns bring to the party: pure sparkly fun. In mythology they are symbols of purity, and legend has it they can only be captured under a full moon by a virgin. We’re not sure anyone at Elūm will be capturing a unicorn any time soon, but whenever there’s a full moon we’re going to look!

“The Unicorn is a Feminist symbol,” Shannon reminds us. “They are ‘girly’ but also super strong. You may be distracted by their rainbow tails, but they have magic powers “Why be a pony when you can be a unicorn?” and a weapon on their head and don’t you forget it!” After we stop cheering, we learn a unicorn’s horn is known as an alicorn and has the power to purify water and neutralize poison. Unicorns are traditionally slow to fight, preferring to settle differences peacefully, but if you ever come between Baby U and Momma U, be prepared to deal with Momma U’s horn charging toward you at full speed. Imaginary or not, that’s gonna hurt.

After some discussion we agree we’re not even sure if unicorns have a gender, and love and support the fact they have become symbols of the transgender and genderfluid communities. Go purple unicorns!

“Unicorns remind us not to take things too seriously,” says Haley. “I mean, c’mon, who doesn’t want a break from being an adult?” Lake Superior State University understands this and issues a delightfully whimsical hunting license for unicorns. Their hunting regulations include permissible times of day for questing. “Unicorns may be taken during daylight and dark except for those hours when the Tooth Fairy is about. She was once frightened by a grumpy unicorn and in deference to her attitude we make the exception.”

Olga says unicorns, “are a flashback from our childhood when every day felt magical and adventure-filled and anything was possible.” We nod our heads and agree we’re “Unicorns remind us not to take things too seriously. I mean, c’mon, who doesn’t want a break from being an adult?” getting closer to the heart of the unicorn’s enduring power. Shannon adds, “When everything is awful, unicorns remain fun and sparkly. They remind us of better days, waaay back before we knew about global warming and human rights violations.” Unicorns are part of our collective childhood. They not only represent our innocence, but also the innocence of the entire world. Existing in a land of rainbows, waterfalls and serene green hills, they reflect our most simple and noble dreams as humans. Beauty, peace and love for all.

We take a moment to sigh and finish our unicorn smoothies and then head back to our desks. Blank paper awaits, and we’re itching to start important unicorn work.

CLICK HERE FOR A SELECTION OF LETTERPRESS UNICORN CARDS

How To Write A Love Letter